My card for today, Coming to Life

Every day I shuffle my deck of The Enchanted Map Oracle Cards created by Colette Baron-Reid and then I pull one out. Today I got number 29, coming to life. Ah, what a magical card I thought to myself. Indeed it is.

"Something beautiful is being born in your life." 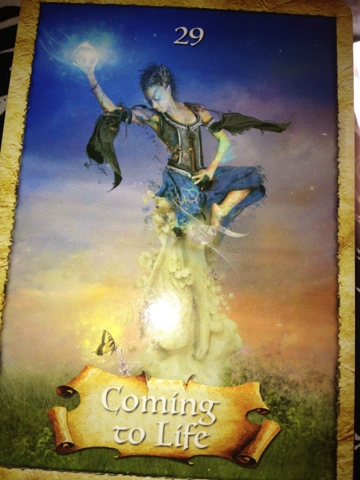 So these words are directly from the book accompanying the cards. It's the enchanted map oracle cards guidebook. Colette  Baron-Reid created this amazing set of cards.
"When you look at your life, can you see how you have grown and evolved over time? Perhaps you've  shed skins and identities and created new ones, Or at the very least matured in your ideas about yourself and the world you inhabit. You know things take time, and spirits timetable is rarely in sync with your own.
This card indicates that a long-held dream is beginning to show signs of life. You must try not to coax it along, or shape it according to your desires. Spirit knows the best form for the manifestation of this dream, and your life can become even better than you could possibly imagine. Now is the time for reverence and awe. Allow the contours of your path to be carved by the hands of the Devine. All you have to do is show up."

What wonderful wisdom.
I hope these words are inspirational to you. They really spoke to me.
Thank you for reading and please feel free to share this post with those you love.
Posted by Pam Carr at 9:38 AM No comments:

Sitting on the deck, Deer visitors and a Musical Night Ahead

Today was a quiet day. A reflective day. I have decisions to make over who will put in my footings for the cob house. A couple of options have already presented themselves so I'm not worried. Elliot couldn't do it after all. He is moving with a young family. They are off to Nelson and I wish them all the best as he goes on to become a teacher

It was good to have peace and quiet today after all the machinery working on my property over the last three days. Lots of positive stuff happened, I have a new wide accessible driveway, my footings have all been dug, and I have a big pile of rock waiting for the rock foundation. 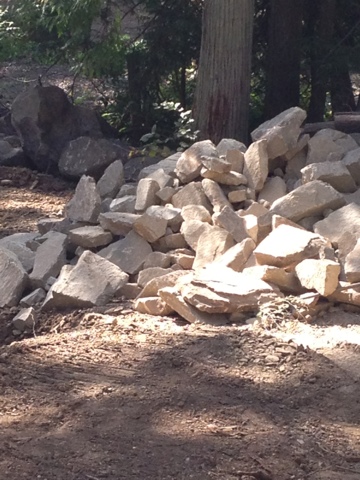 Some hard-working young men came to chop up some of my logs that were blocking the way, and they took them away in their truck, giving me a little money for the wood. All good. 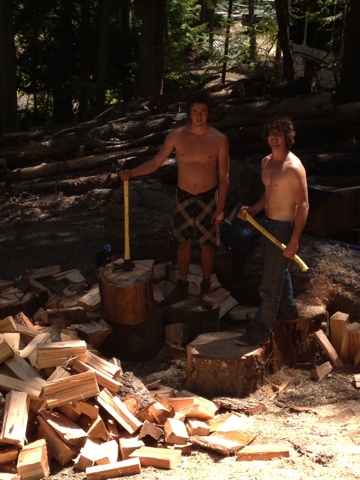 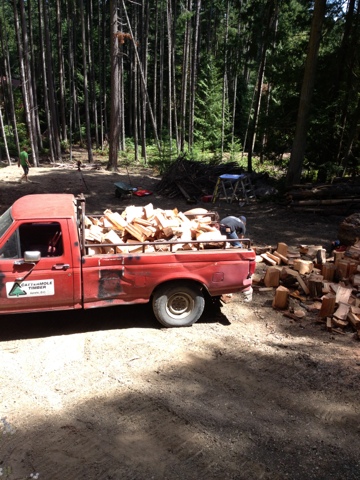 Now I'm all dressed up and ready to go and meet my friend Carol and some visitors from Maple Ridge.  We are going  out for dinner at the Springwater Inn.  Then we are off to an open air concert beside the agricultural hall (Ag Hall in local speak).
I'm sitting on my deck sipping a gin and tonic accompanied by a deer who's having dinner just beside my deck. 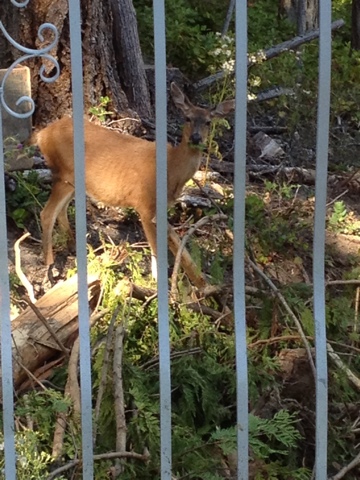 I'm looking forward to tomorrow because my friend Rachel is coming over on the   sea taxi from Salt Spring Island for a visit. We haven't seen each other for quite a while. 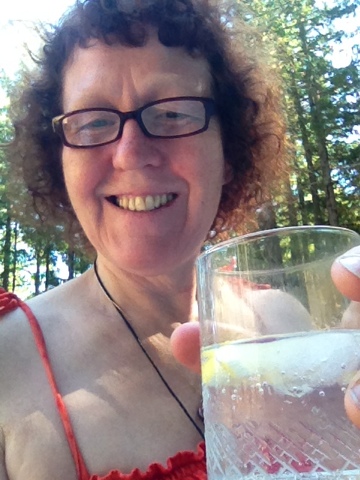 Island Life: At Least I Have Electricity

Usually when I come to the island it's for short periods of time. Right now I'm here for the long haul, building the house. Normally I just went  across the road to my friend Carols for my showers. But I decided to try and rig up an outside shower. I found some very sophisticated designs online for outside showers, but decided to go simple.

On Monday, a very resourceful Island guy called Rudi, came over and helped clear away the embankment by my trailer to make space for an outside shower.
I wrote more about it on my cob house blog. :-) 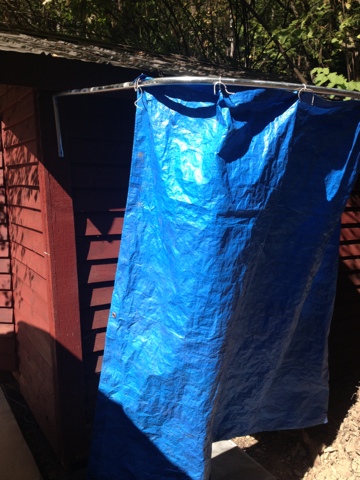 So now I just have to hook up the propane powered water heater and I can have hot showers. 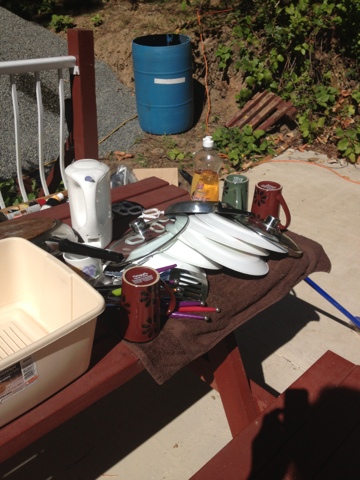 Last time I was here I got a sink and hope to get a temporary kitchen set up outside. That is next.
I am very happy in my little trailer and so grateful for this opportunity to spend time on this beautiful island and build my wonderful new home.

Searching for driftwood that will fit into my Cob House

This morning I set out to walk Bennett bay beach to see if I can find any driftwood that would serve as lintels or posts in my cob house.

I came upon this just drift wood fort beside an amazing Arbutus tree. 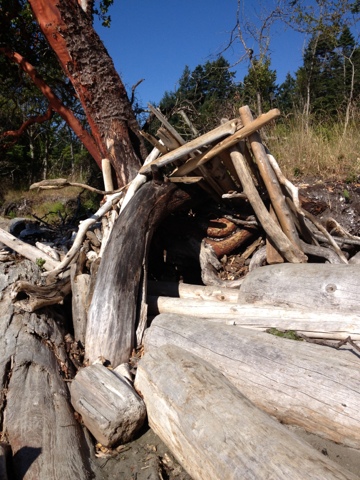 Further down the beach there was another Arbutus tree overhanging the class. The root ball was completely exposed. 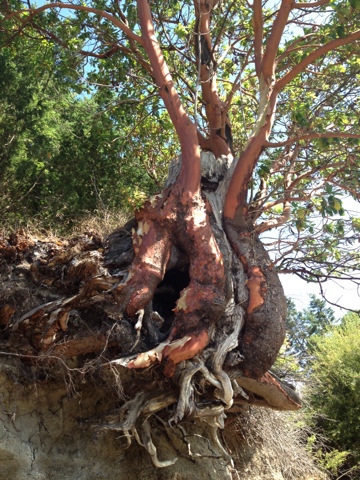 The last week I have been on Mayne Island.  I thought I was going to be milling wood, but that was not meant to be. And as usual, it was all for the best.
I had just had a very hectic end of the school year as I was clearing all my personal teaching resources out of the classroom and preparing it for the new teacher. I am taking next year off as I was granted a years long term leave.
Thankfully my eldest daughter came over and helped take most of the books, puzzles etc to her place as my grandchildren are the perfect age for Letterland etc. I taught Kindergarten/Grade 1 and that is what they will be in next year. I love it!

So school ended on Friday, then I was into analyzing my research for my Masters thesis on Handclapping Games and the informal learning that happens as children engage in them.  I had a deadline as teachers from my school had kindly volunteered to come over on Sunday at 4:00 to view the videos and note their observations on a rubric I was to create.
Here is a video off youtube, as I can't publish pictures of my students here.


Miracle of miracles, I got it all done and even had time to take a trip to Staples to get a HDMI cable so we could watch all the videos of the children playing on my big screen instead of off the laptop.

Monday was Canada Day and my grandchildren came over for their first ever sleepover at Grandma's. We had so much fun. First we walked down to the Fraser River, saw the train and threw rocks in to see them splash. 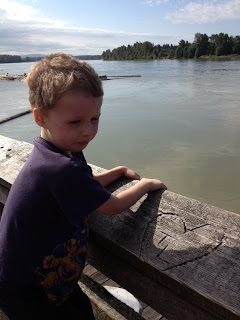 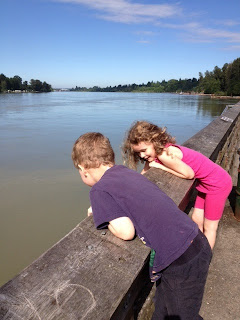 Then we saw some fishermen and they actually caught a fist as we watched them. I didn't know you could fish down there. 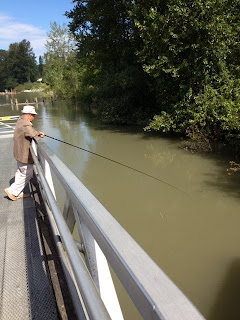 Then we walked up to the Dairy Queen and had ice cream and icy water to cool down. 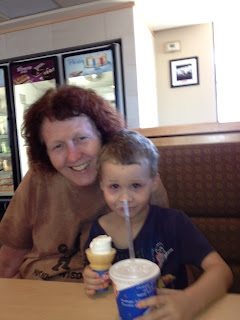 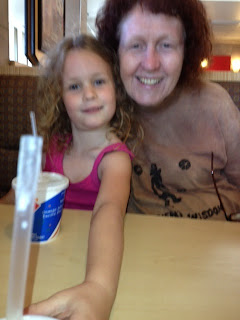 When they had gone home I prepared to leave for the ferry and things got quite frantic as realtors phoned to show the apartment, and I was leaving, lol. Too much to go into but it was amazing I got to the ferry on time.

Once I hit Mayne Island I realized I really needed to slow down and relax. It was so fortuitous that Lou and I did not do the milling, how things changed and now I am onto plan B, (see Pams Cob House for more details :-))
I was able to just stop and read and reflect and take time. It was interesting how after two days I was thinking I ought to be doing something and I pulled a card that said, if you don't stop and rest now, you will be forced to in time. AHA.  I chose to listen and went for walks and enjoyed the sights and sounds of my little part of the island.
There are so many sweet little cabins and buildings on Mayne Island. Here is one I pass regularly on my walks. 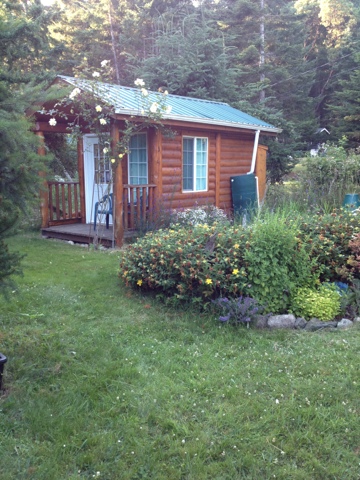 Something very special for me is how close the Mayne Inn is to where I live, it really is my local, lol.

I popped in there for supper after one of my walks and had some delicious fish and chips. I rarely have dessert, but is was such a hot day, how could I resist the lemon sorbet. It was as refreshing as it looks in the picture. 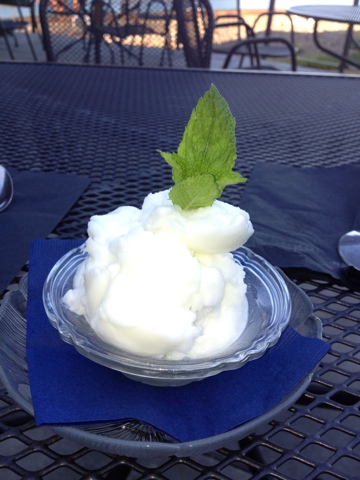 I did get lots done in the way of co-ordinating the building of the house.  Yesterday I had to head back to Maple Ridge for Doctor and Dentist appointments. Also I have a Pamela Sunshine gig on July 14th at Civic Square in Burnaby. So I headed off to the ferry and I was first in line. 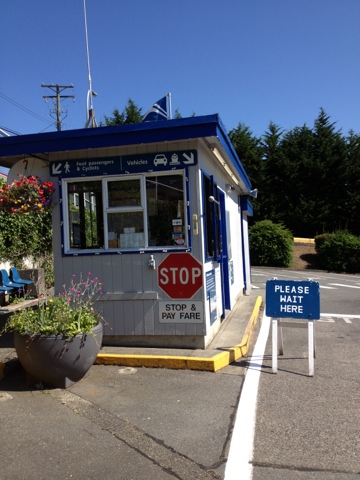 The ticket man was actually still doing some janitorial duties when I arrived. :-) Anyone who knows me well will be surprised to hear I was actually early!  I was second in line. 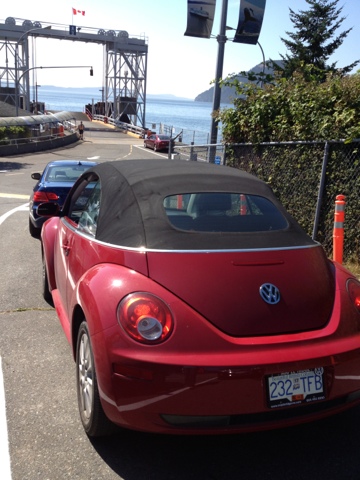 It was such a beautiful summer's day and the journey was like a holiday in itself. It always makes me think of my Mum and she just loved the ferry trip over to Victoria. 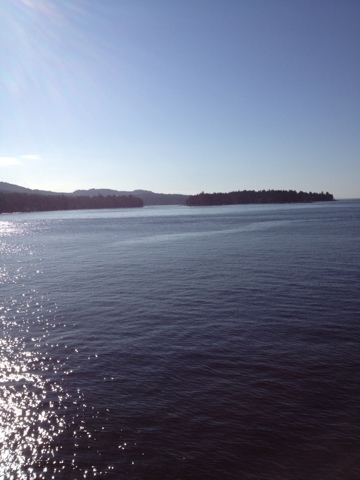 Relaxing on deck in the sun is part of the beauty of living in BC. 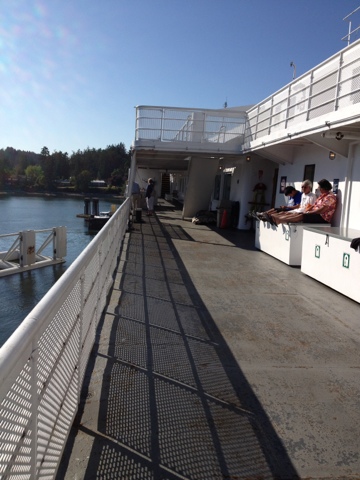 After a relaxing summer day in my trailer, reading and recharging my batteries, I decided to walk down to Bennett Bay. It's only a ten minute walk and I decided to visit the sandy side tonight. 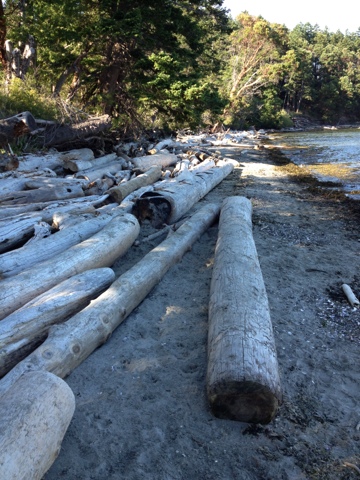 It is such a lovely beach with driftwood logs lining the shore, bleached white in the sun. Also seaweed floats where the water  meets the sand. And the waves washing in are so relaxing. 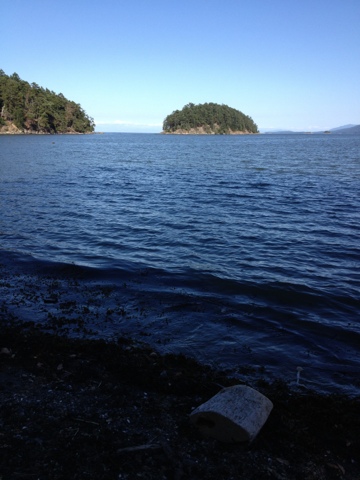 Folks are just setting out for an evening of kayaking. The waters of Bennett bay on Mayne island are fairly calm and the perfect place for kayaking. 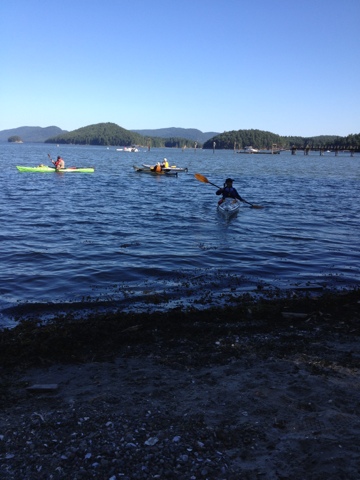 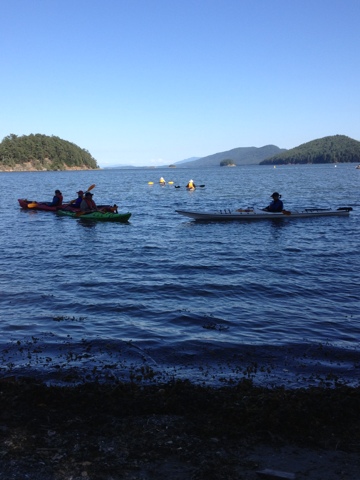 This is something I hope to do one day. 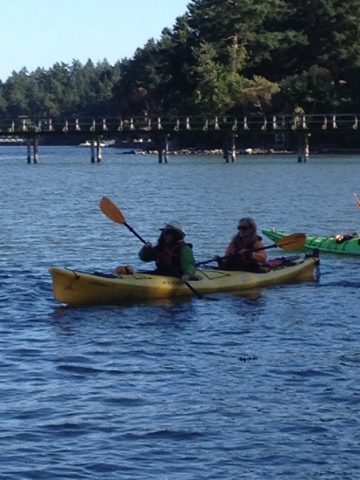 Seeing the kayakers is quite a coincidence as my masters cohort went kayaking at Deep Cove last night. Since transferring over to the thesis program I don't get to do all the fun things that go with the embodied movement course I am missing.  I miss the weekly classes and getting to talk with all the members of my cohort. Such interesting and generous people.
Still I'm not complaining about being able to sit here on a log and take in this wonderful evening, breathe in the salty air and feel the summer breeze on my face.
I am here on the island to put some plans in place for building my cob house. I feel so fortunate to have had a couple of days to unwind.
Tomorrow I hope to connect with those who own logging trucks and wood mills  :-) .
Posted by Pam Carr at 6:38 PM No comments: